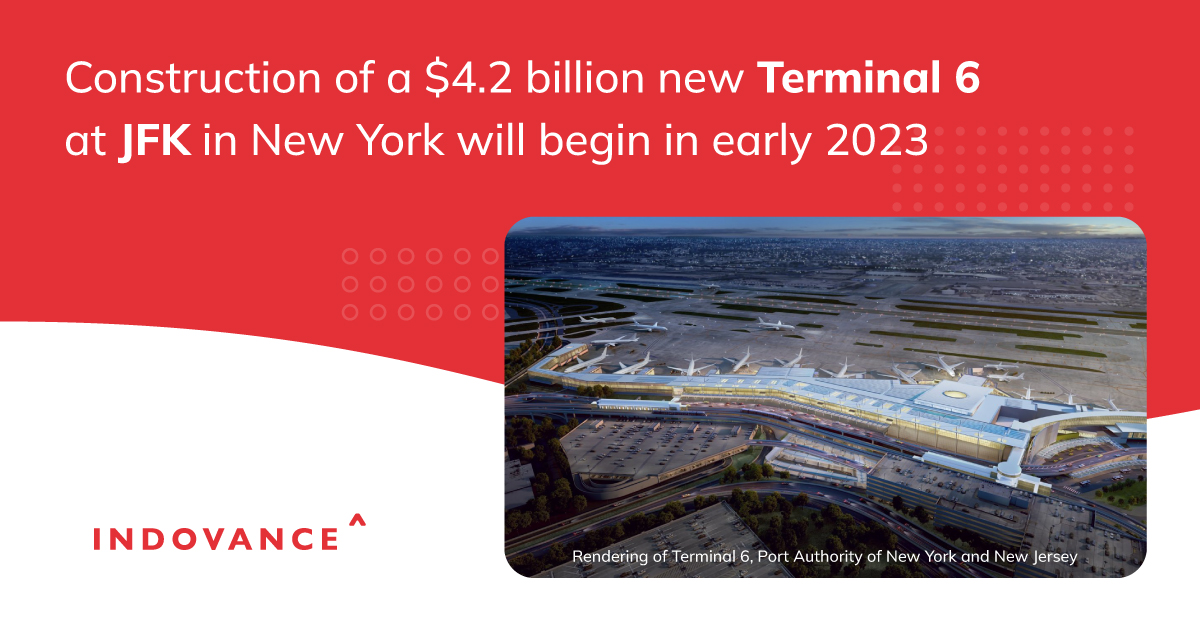 Gov. Kathy Hochul announced that early next year will see the start of construction on a brand-new, $4.2 billion terminal at John F. Kennedy International Airport in Queens, New York.

This project will complete the airport’s transformation into a 21st-century global gateway and is the last component of the JFK Vision to transform JFK International into a modern airport with exceptional amenities, expanded taxiways, gate capacity, cutting-edge security, and simplified roadway access. With shared exterior facilities, the terminal, Terminal 6, will connect to JetBlue’s Terminal 5 to better serve passengers.

An environmental permit from the Federal Aviation Administration (FAA) has been obtained for the new 10-gate, 1.2-million-square-foot Terminal 6, which is anticipated to service its first passengers in 2026 before being fully completed in 2028.

The JFK renovation plan was first revealed in January 2017, showing eight terminals to be combined into one unified airport with terminal complexes on the north and south sides. Roadways, ground transportation, and airport amenities were also expected to get better. The number of passengers using the airport is predicted to rise by 15 million annually.

The COVID-19 pandemic significantly slowed down and delayed the Terminal 6 project at JFK International, according to Cotton. The original agreement broke down, and the anticipated ground-breaking in April 2020 never took place because of the financial uncertainty brought on by COVID.

The JFK International Airport expansion of Terminal 6, also known as “The New Terminal One,” is one of the most significant public-private partnerships in the history of American aviation between Vantage Airport Group Ltd and Corsair Infrastructure.

Indovance Inc  with its exclusive delivery hub in India is a global CAD technology partner serving the needs of the AEC industry since 2003. At INDOVANCE we focus on the unique need of each project or client and believe in addressing the real challenges and guarantee that the process will be well-coordinated, smooth, efficient, and hassle-free.

We collaborate with our customers around the world to develop bespoke business solutions using our enormous engineering talent pool and state-of-the-art technology. To deliver long-term engineering and business strategies, we align with your culture and processes to create an unbreakable partnership. With over 500 full-time employees and more than 600 customers in the US, Europe, India, and Asia, we are poised for the next level of success.

Indovance acts as a catalyst, Empowering You for positive change and supporting you to Do More.