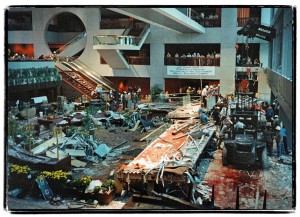 To err is human. We all know this fact. But, sometimes erring can prove very costly. In fact, costly is a weak word to be used here. Engineering has helped man to a greater extent, but sometimes, blunders in the engineering have proved fatal and taken many lives. Engineering disaster reminds us of Hyatt Regency incident. On an ill-fated day, July 17, 1981, two of the vertical walkways of the Hyatt Regency Kansas City collapsed directly onto a partying crowd in the hotel lobby. The tragic incident took lives of around 114 people and left 216 people hopelessly injured, physically and mentally.

Hyatt Regency Walkway collapse was a grave mistake in the history. But, how did this exactly happen? Was it a man-made disaster? There are many reports that point out to different reasons. One of the theories suggests that the mishap occurred due to the flawed design. Was the design really flawed? It is said the original design that was proposed for the walkways was changed. Now, this new design could not apparently take the load. And as the structure couldn’t take the load, it had to collapse.

The original design had the beams that were supposed to only support the fourth-floor walkway. But, the changed design made this beams support the fourth and second-floor walkways. So, the load obviously did go up. The load almost doubled. The original design could take up to 60% of the minimum load. But, the new design could only bear 30% of the minimum load. You can see the difference between the weight bearing capacities of both the designs. And this is the prime reason that steered the walkway collapse.

But how could this have been overlooked? It is said there was a miscommunication between the two companies (fabricators and engineers). Initial drawings submitted by one of the companies were taken to be final designs. Without the designs being meticulously analyzed, these designs were approved as the final designs. And it is said that even the calculations were also not made. So, the structural analysis went for a toss with wrong designs. Everything boils down to designs here. The incident of Hyatt Regency Walkway is said to be one of the ugliest structural collapses in the American history.

Post this incident, most of the things changed in the engineering. Now, the onus of the building in totality lies with the firm who approves the plans and designs. And seriousness in performing the calculations also became more serious. This is a serious business because Hyatt ended up paying $140 million to victims’ families. And the standards in the engineering were also re-looked. It is very crucial that these designs are perfect with all the elements are factored in.

Today, engineering has become more complicated. And most of the engineering firms depend on the CAD drawing and drafting services.

Indovance Inc is one such company which provides all sorts of engineering design and drafting services in the Mechanical engineering, Civil Engineering and Architectural drafting services. For more information about our services and offerings, speak to us at: +1 919 238 4044 or you can also email us at: info@indovance.com